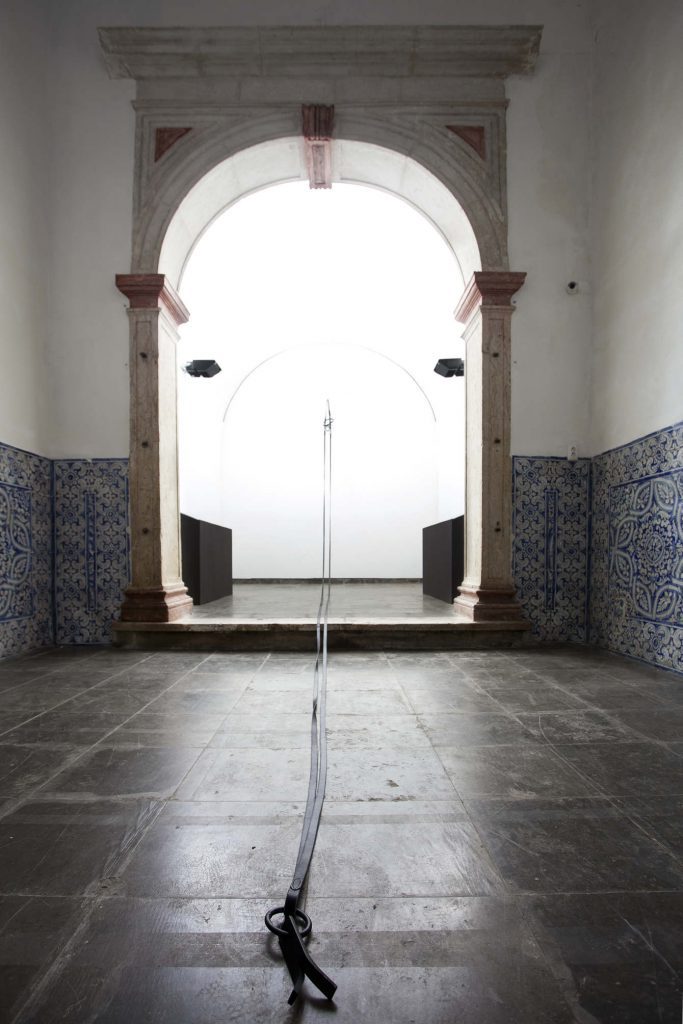 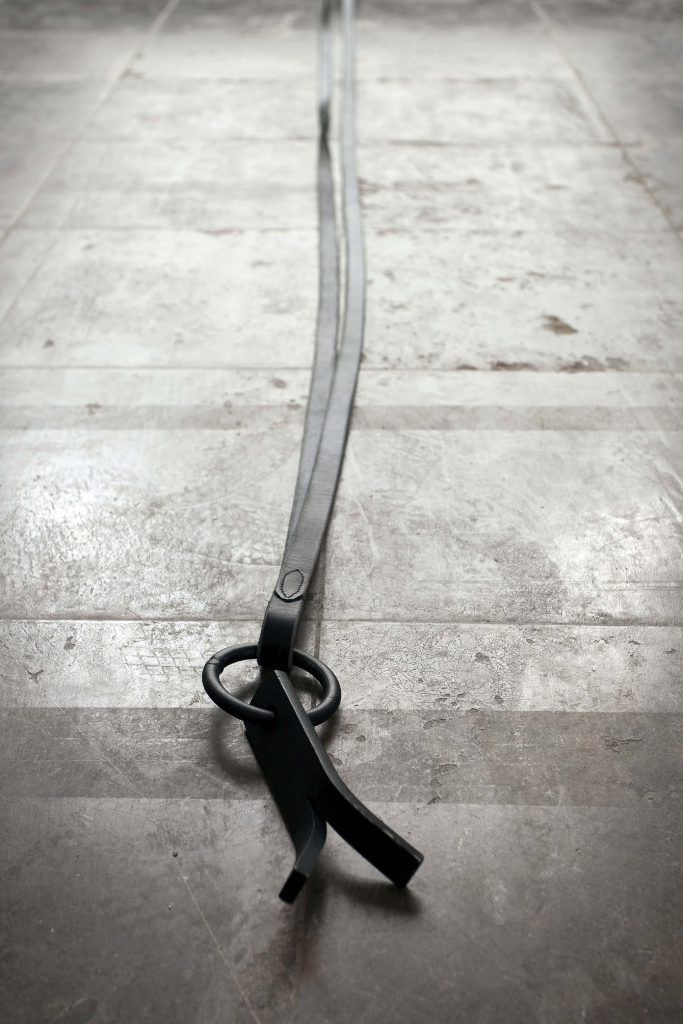 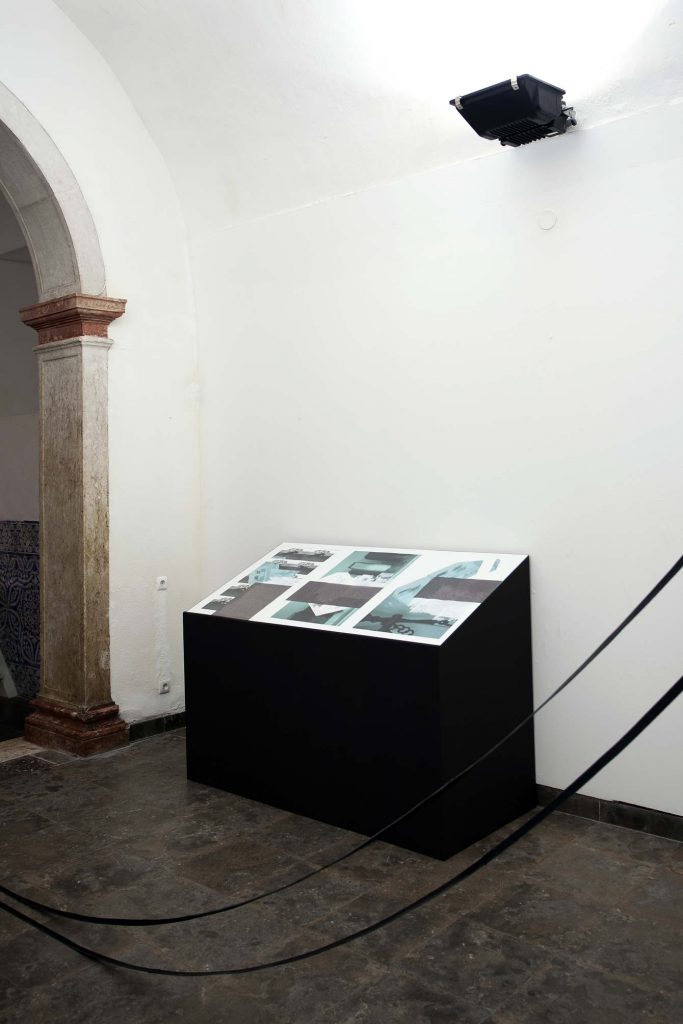 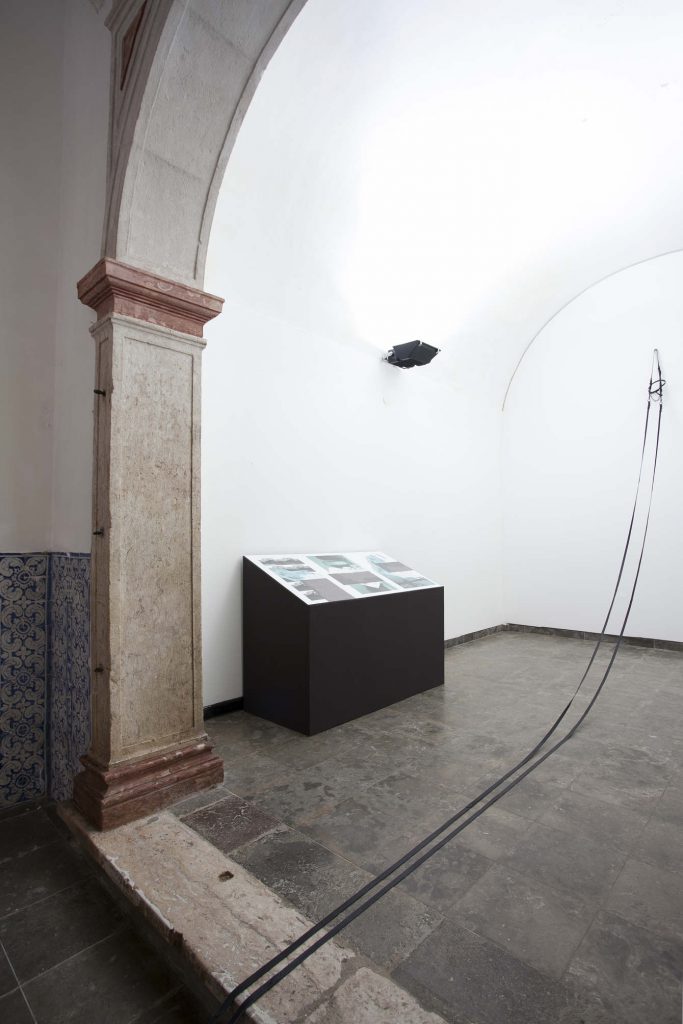 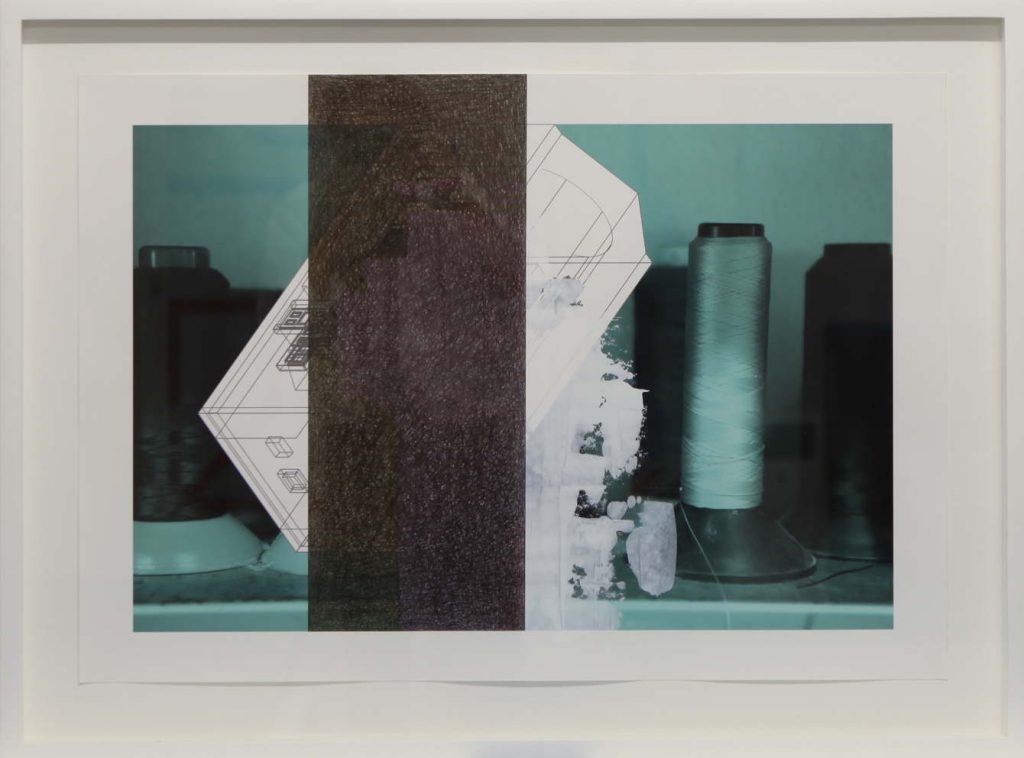 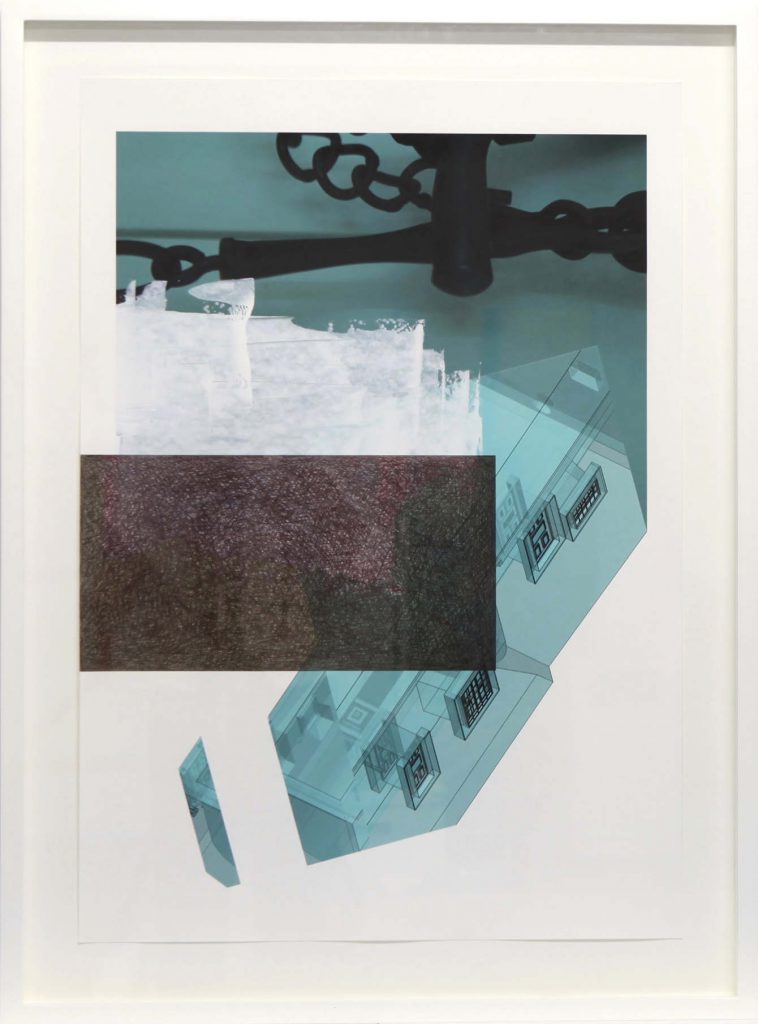 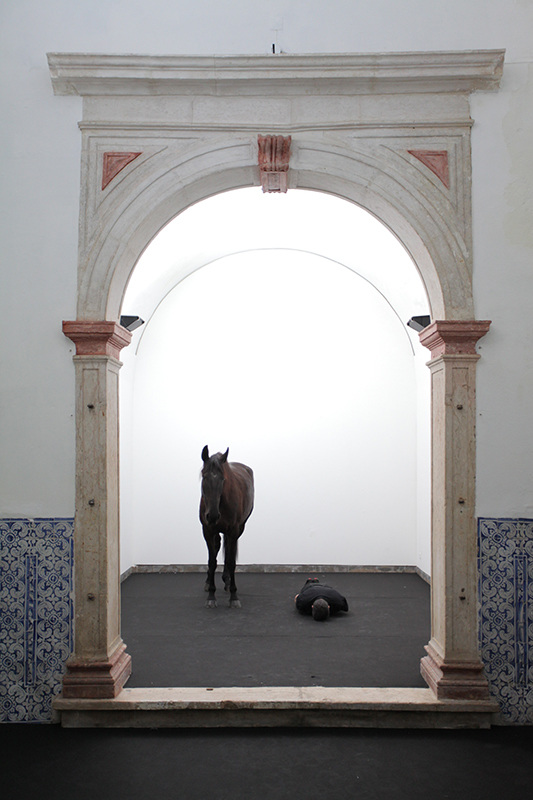 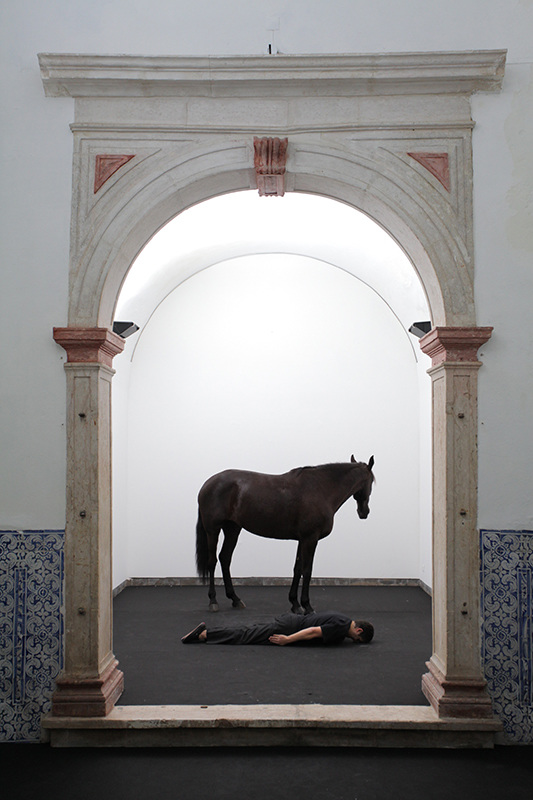 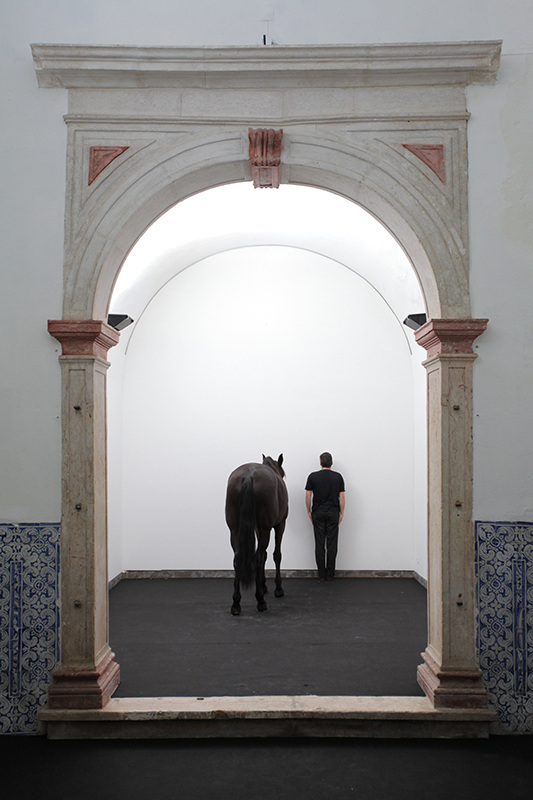 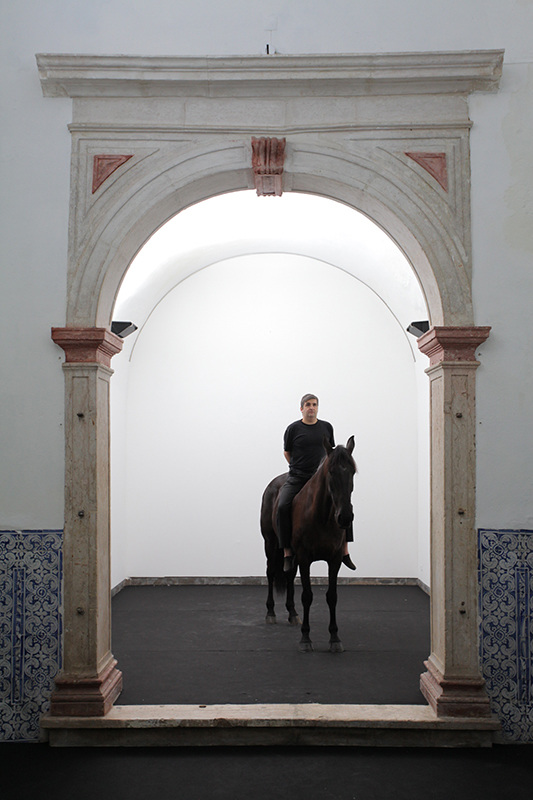 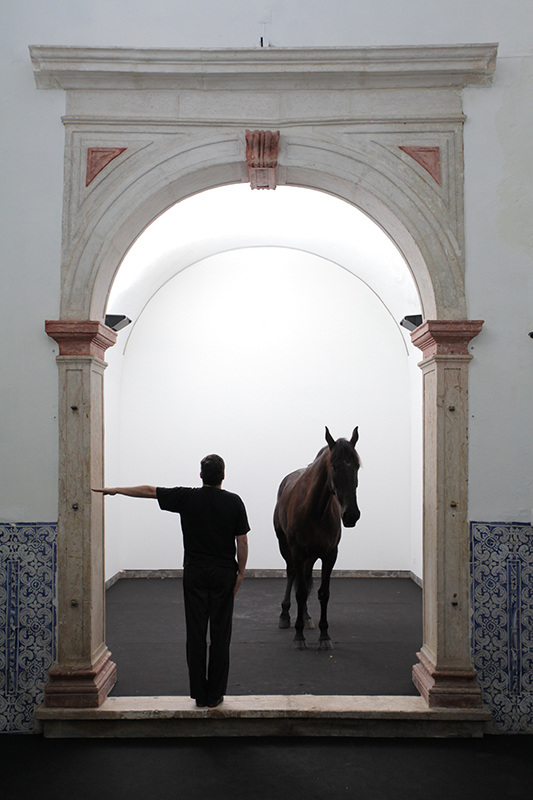 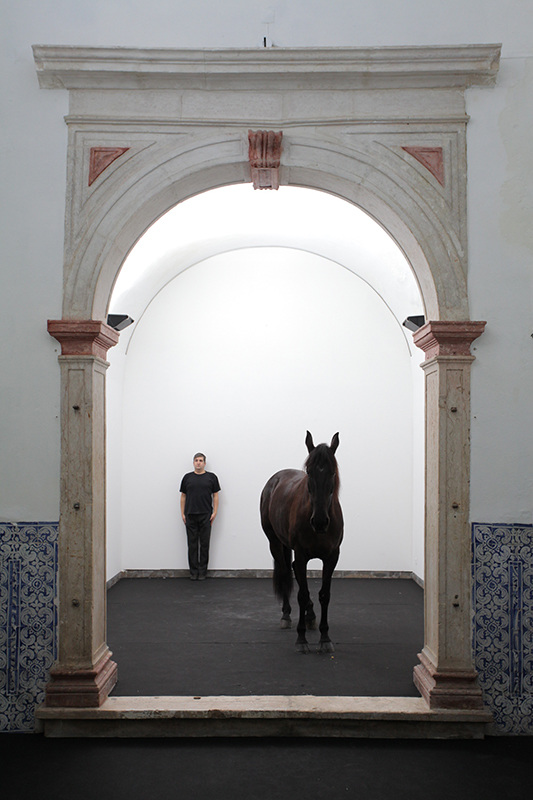 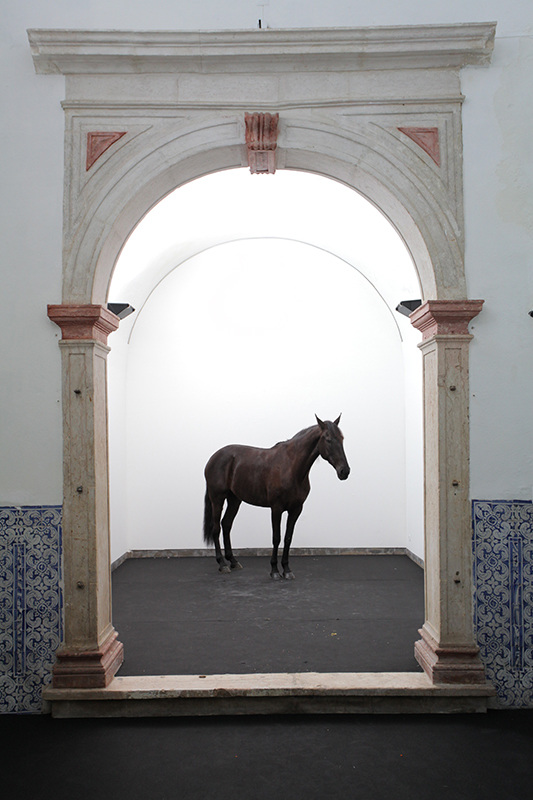 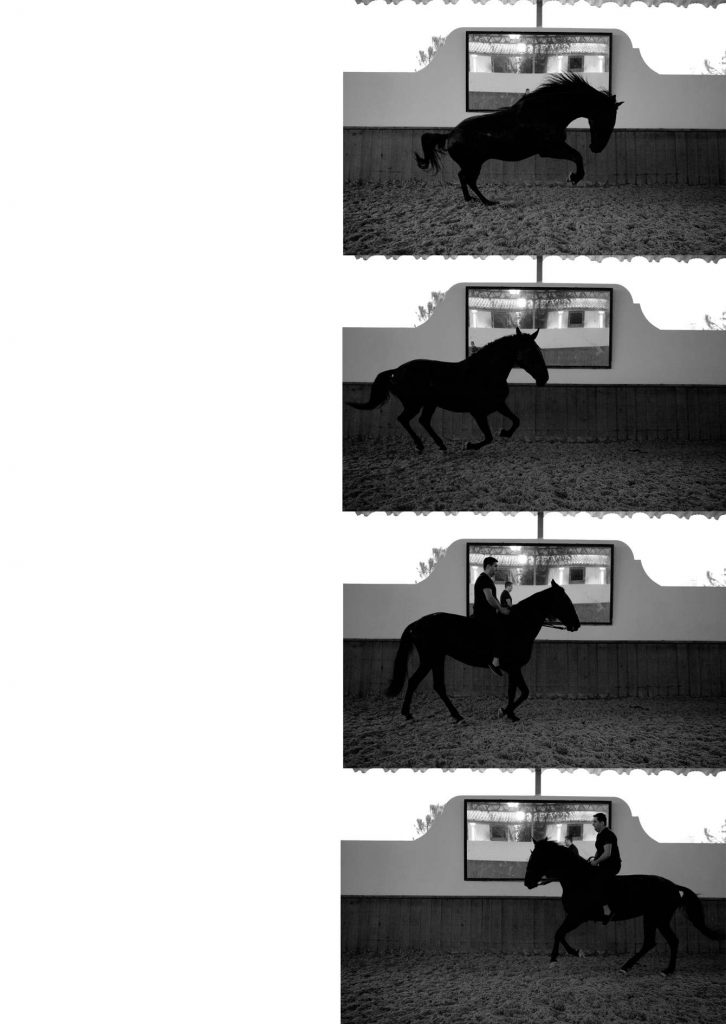 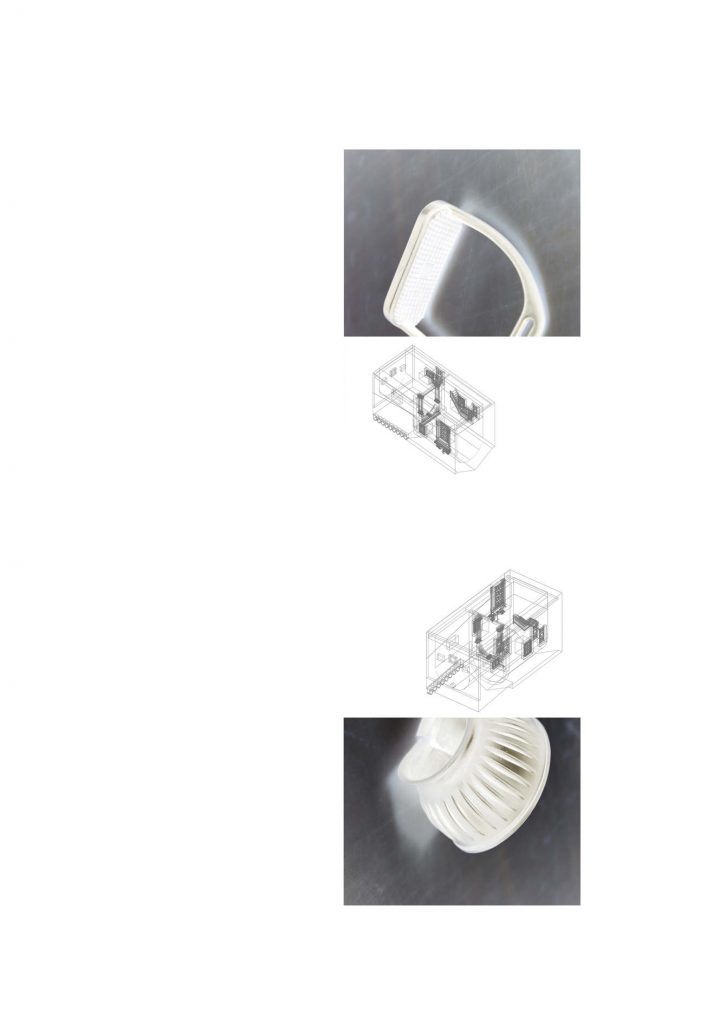 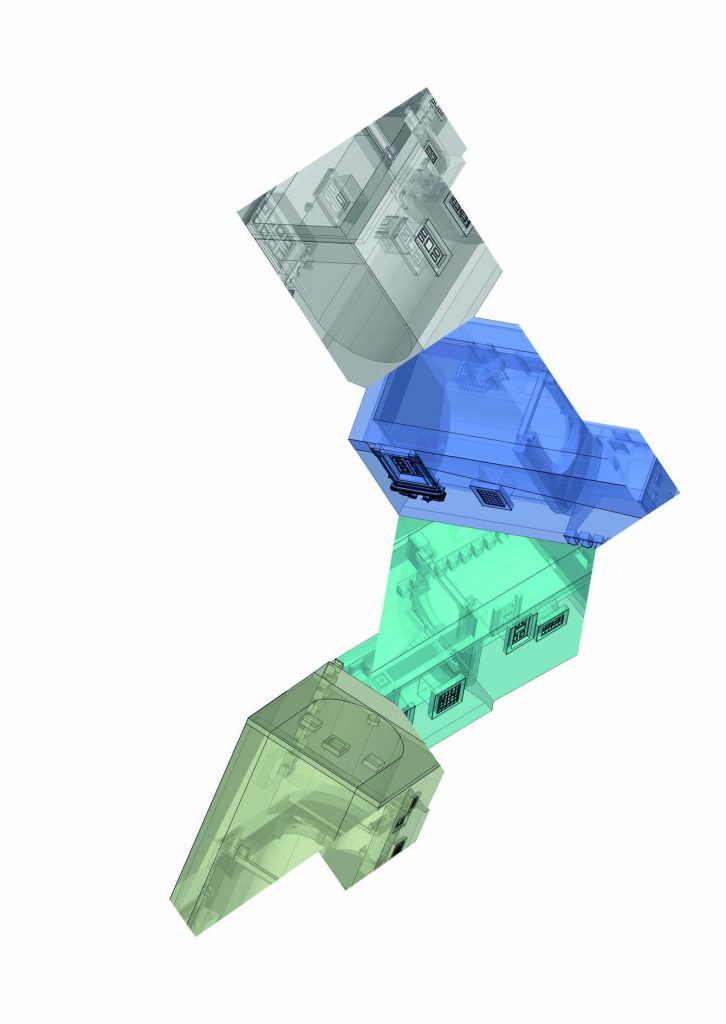 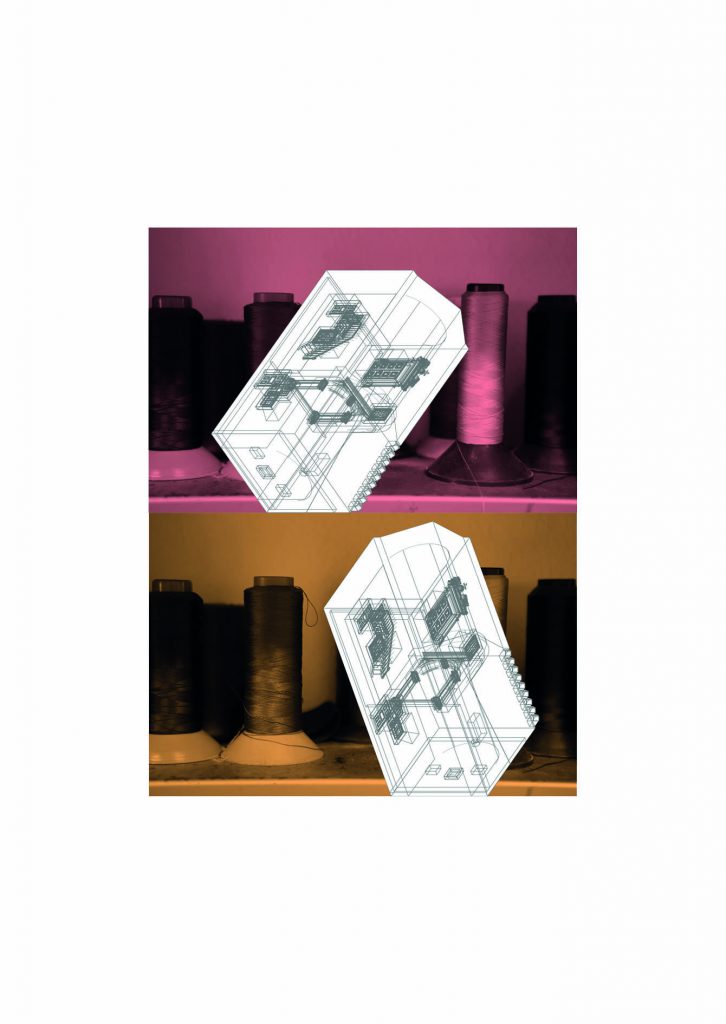 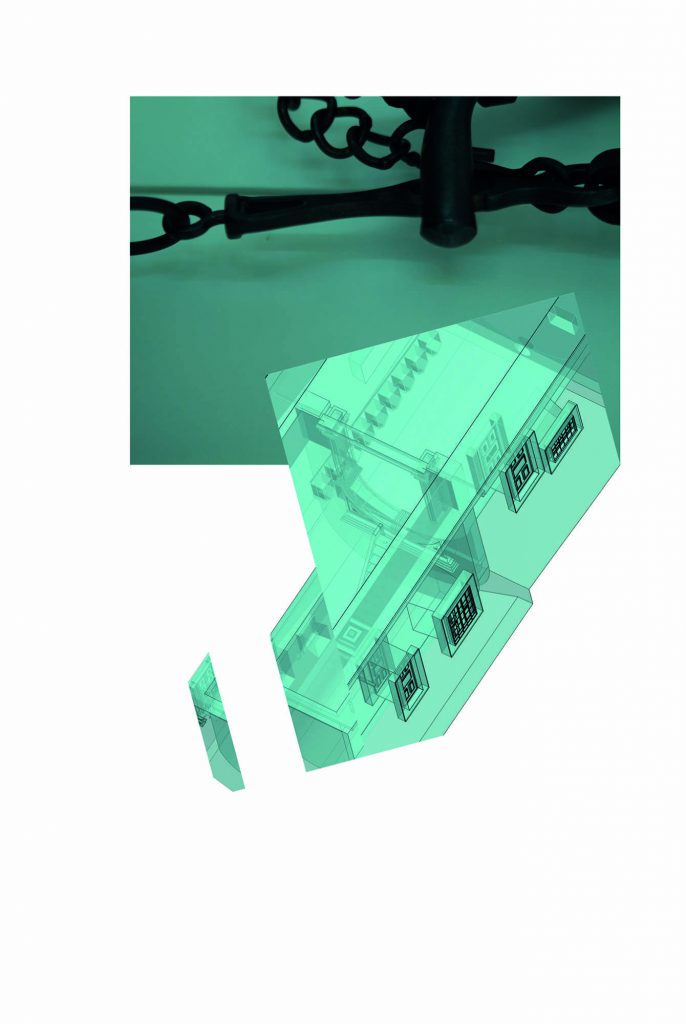 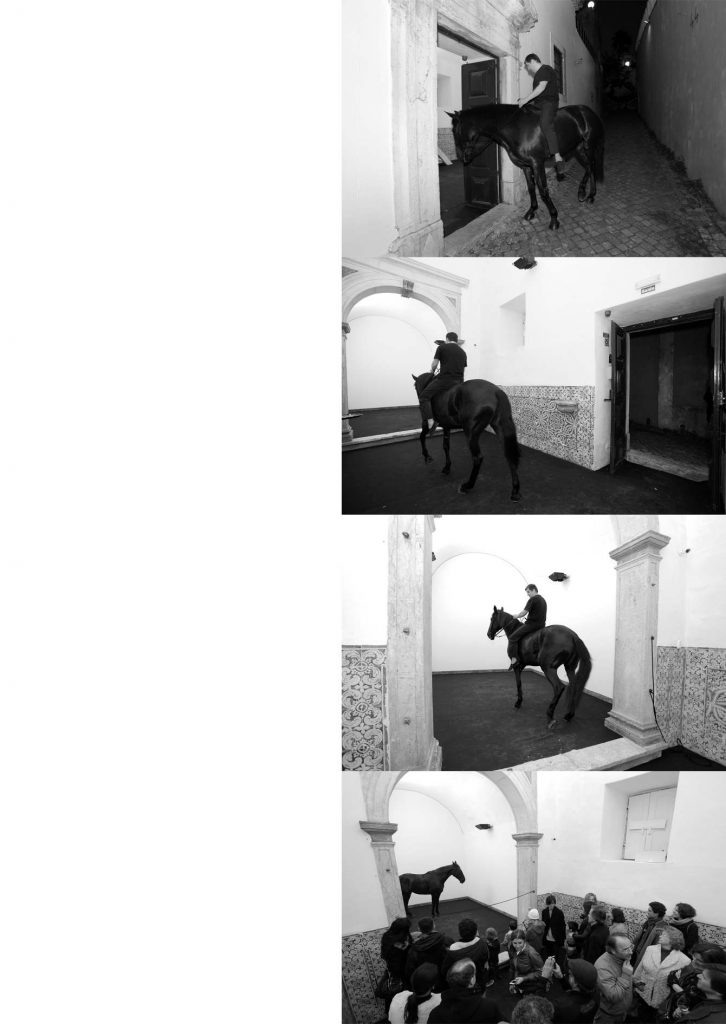 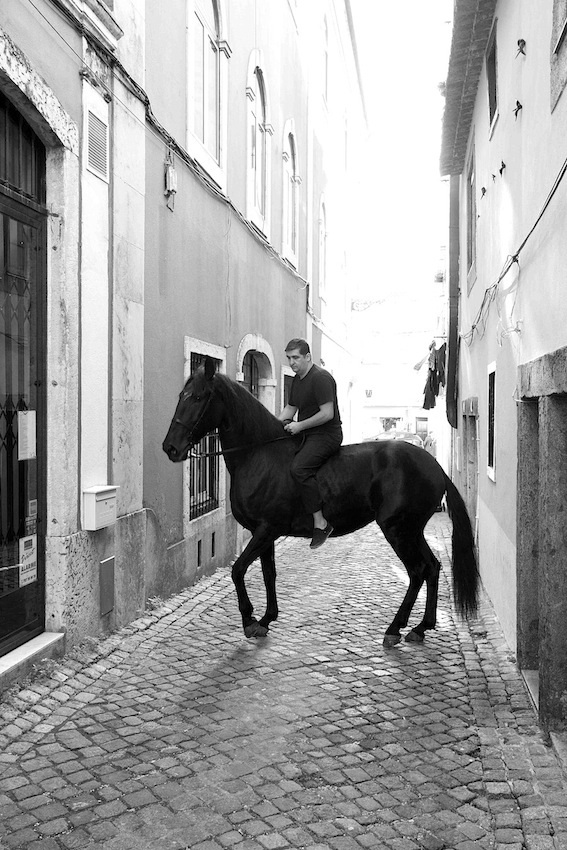 The exhibition “2015 rebuild_02” is an aesthetic operation confronting us with the intensity and a determined way the artist searches in the performance’s experience. Apparently, this shows up to us as transgression, however, Tomaz Hipólito recovers models, actions and representations diminishing in nothing the historical quote because its relation to facts, as presence, turns the possibility of experience as correlate of a present event and its past into something concrete.
Under Ermida’s architecture, an equine exhibits its nature allied to representation’s history. Painting, drawing, animal anatomy and all stories summoning war and honour acts, as noble knighthood, or animal work on agricultural fields, nature’s dominance, transforming itself in landscape, changed by what this equine’s beauty, in fact a mare, exhibits while displaying example of human skilfulness, making itself present on the oriented construction of a domesticated animal, in which its own scale is overcome so we can think about freedom, and simultaneously in power able to dominate it.
It is in this scope that the exhibition, following the performance, will confirm a refined study about the possibilities that all inscribed reflexion in this project can express. In that second moment, the animal’s harness is already a sculpture that, in its dislocation, exceeds the tool fit to skilfulness. And it is also documented and worked object the one preceding the animal’s presence, but that convokes procedures and protocols in other times dominators of architecture at the proportions’ measure of the mount.
The performance, in its ephemerality, will reveal the Ermida’s space as a brief exaltation place, a model rewritten as public act, the one freeing and betraying us before the animal and artist’s presence.
The book, being processed at the time, will be a resisting document to the performative act ephemerality and to the disperse memory that each one of us will keep from this event. Tomaz Hipólito’s work is exactly like this, taken over a set of conversations under the format of an interview, in which his work is rediscovered on the encounter of motivations and procedures the artist has been developing.
Performance, in its relation with the places and various spaces used by the artist, is apparently his most present artistic expression. Nevertheless, other means, as photography, video and drawing, are essential tools to develop his artworks, always considering the necessity of a continuously experimenting conscience. It is in this persistent sequence, that the return and revisit of his work’s previous moments happen, making themselves present in series, the ones, although consigning to a common question, unfolding themselves in the Other’s experience, in various situations, becoming that Other an active participator. As in here, in this cipher: 2015 rebuild_02.