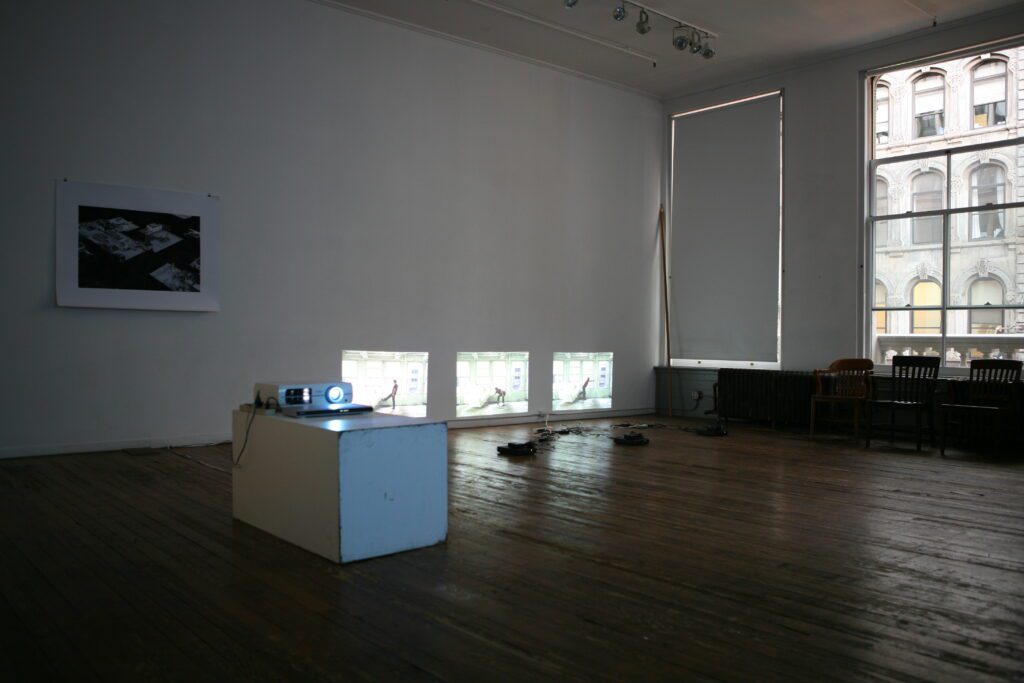 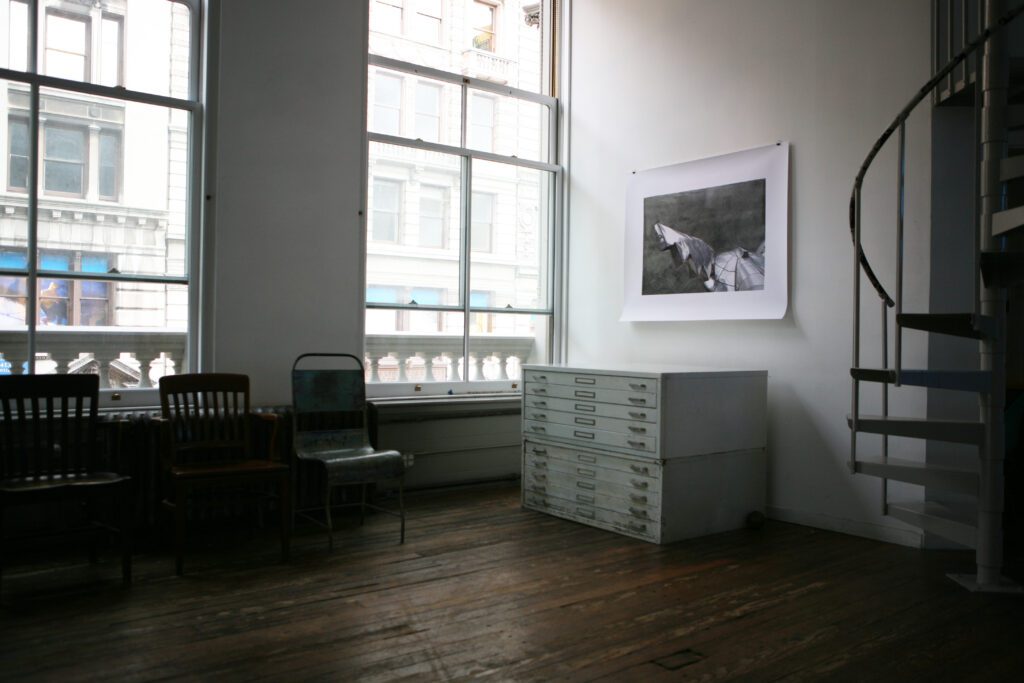 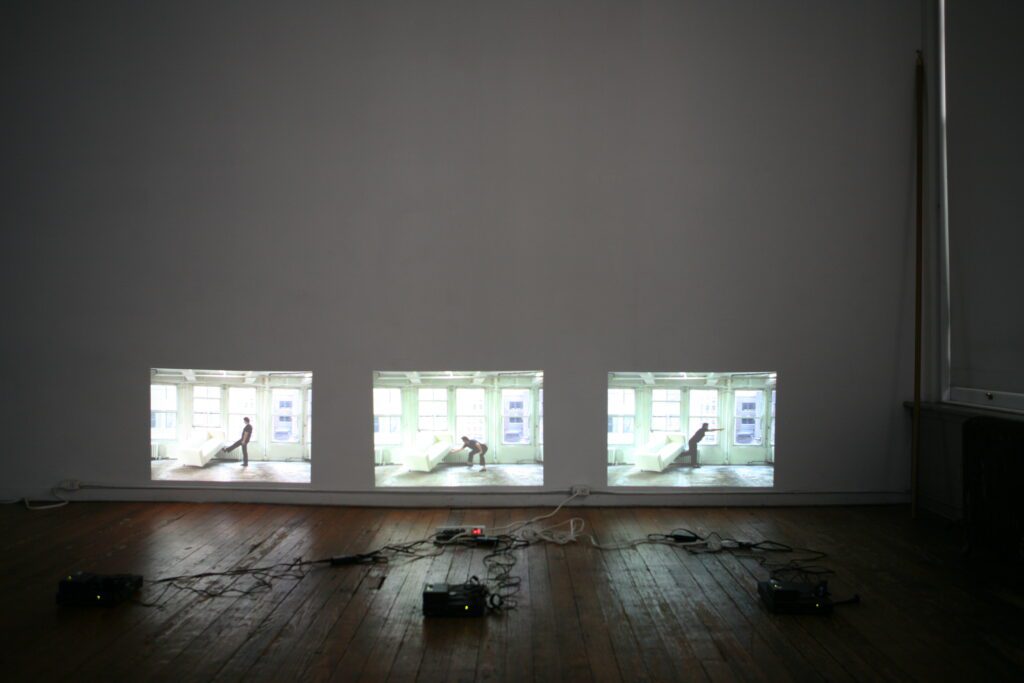 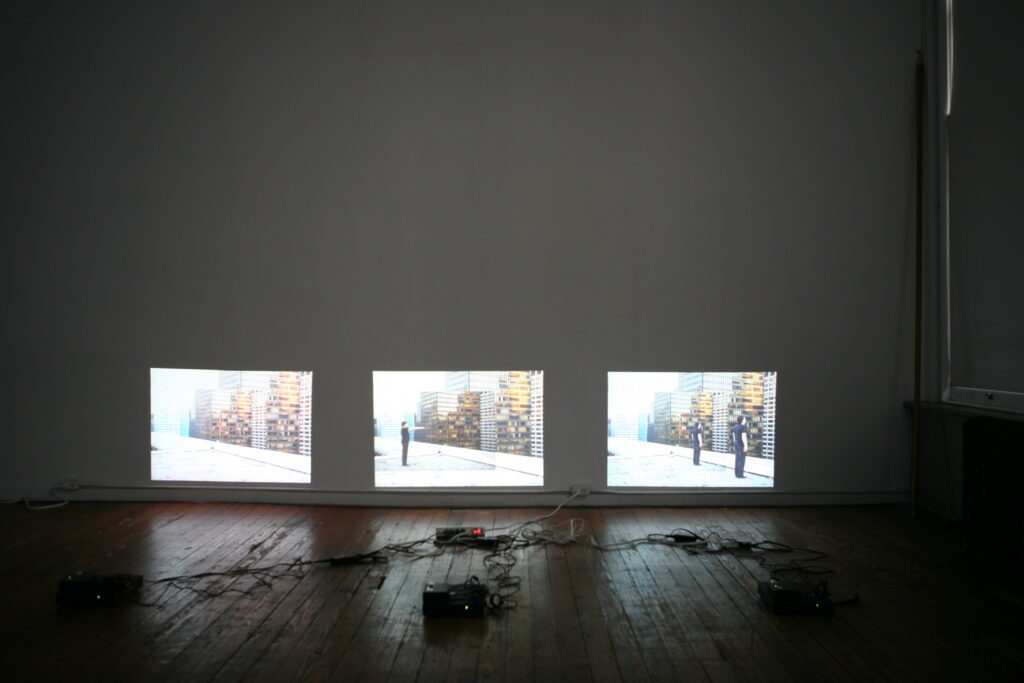 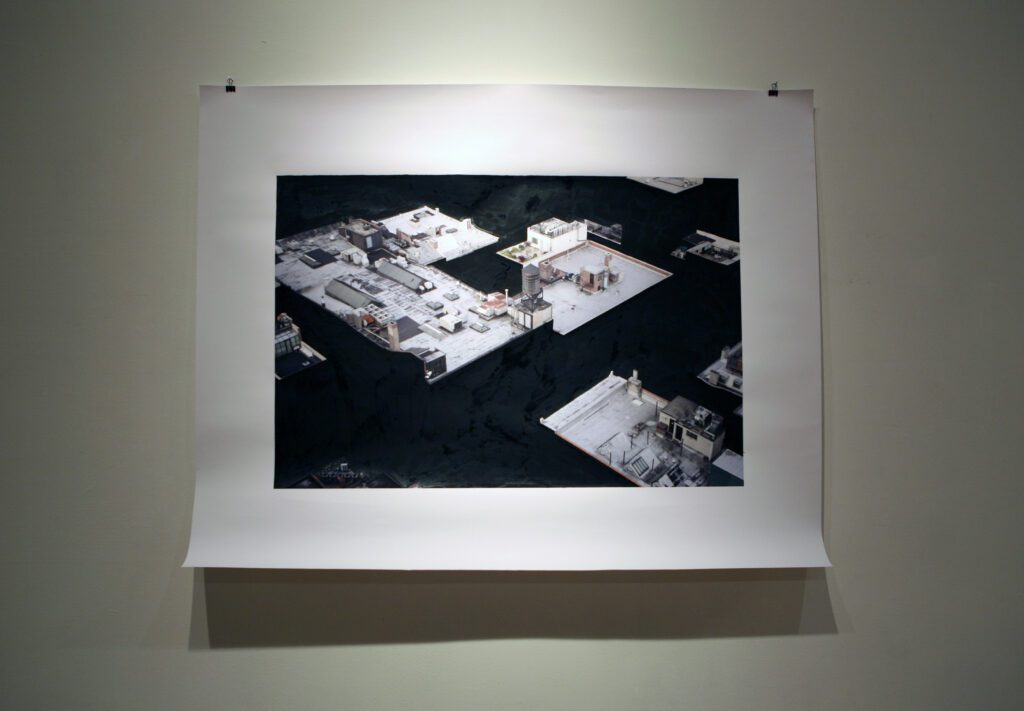 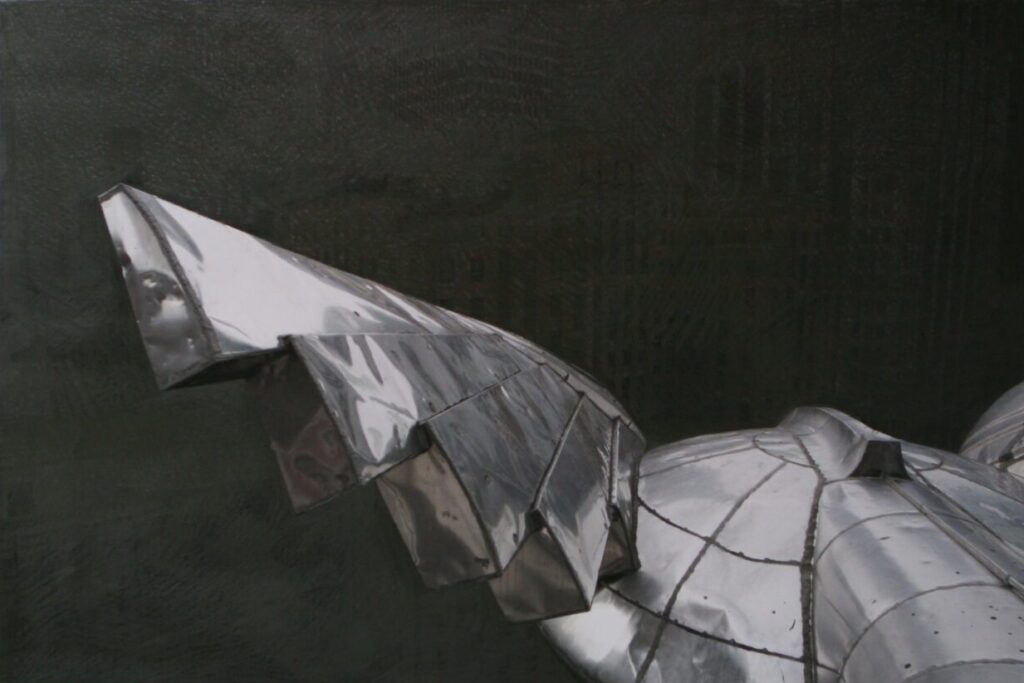 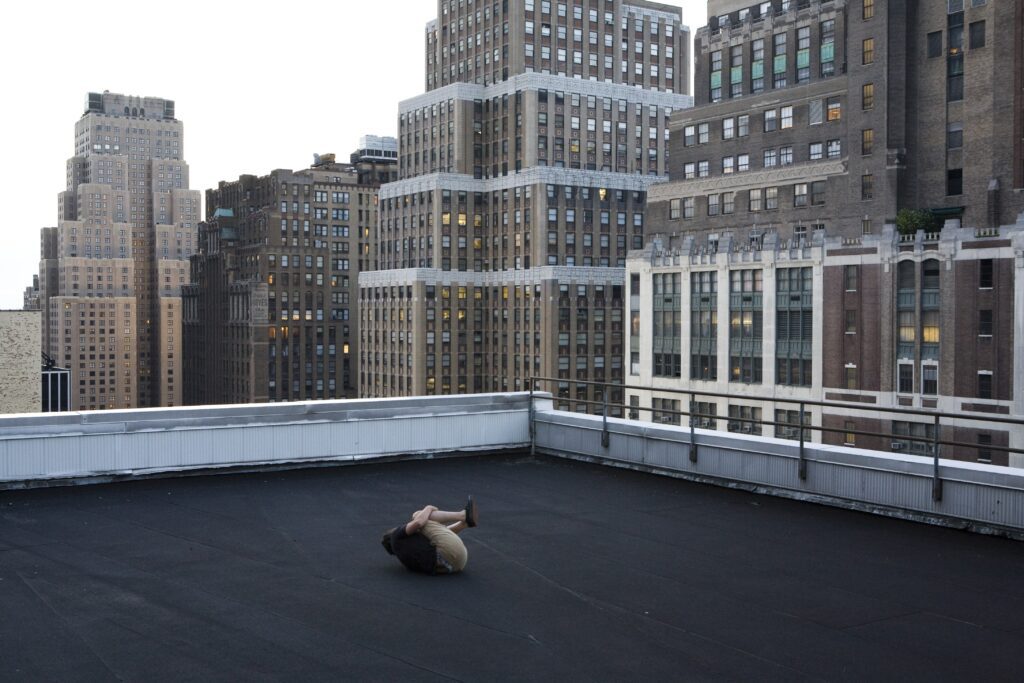 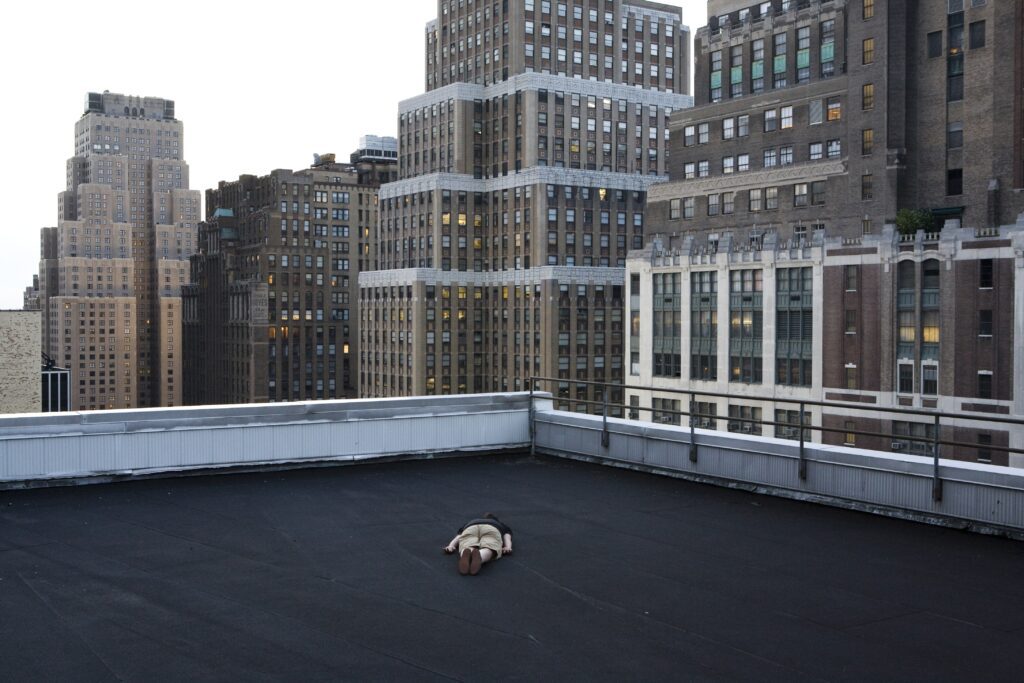 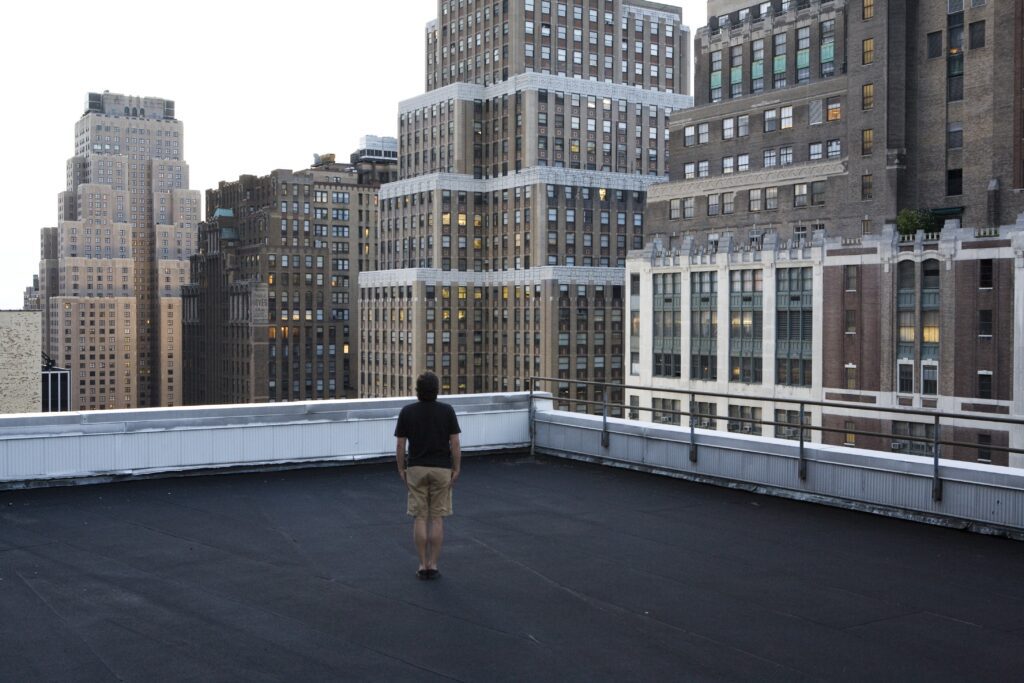 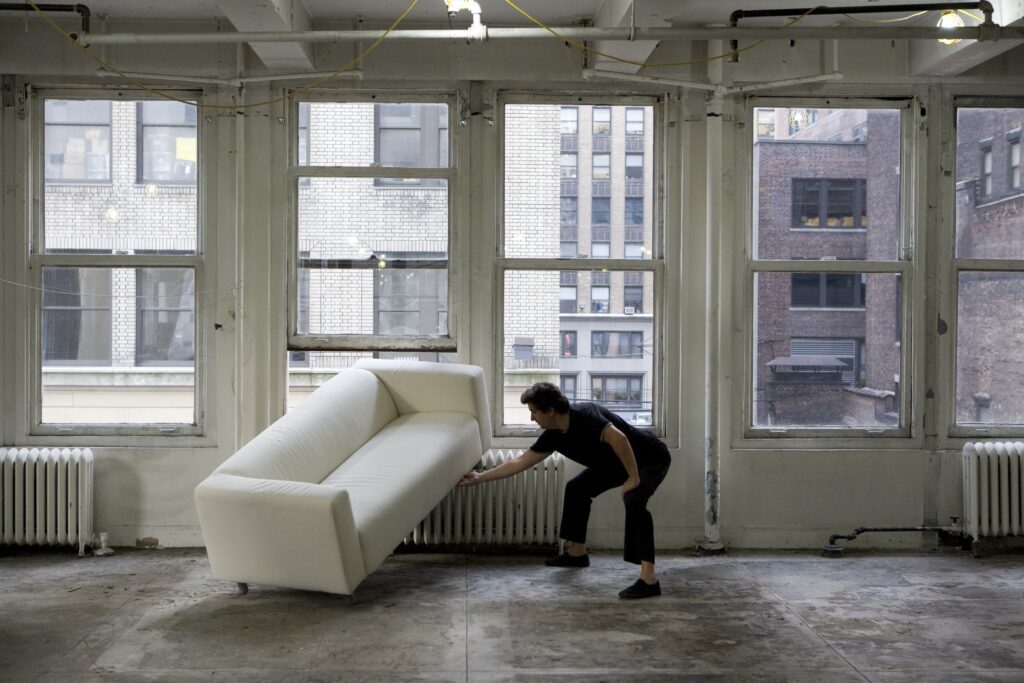 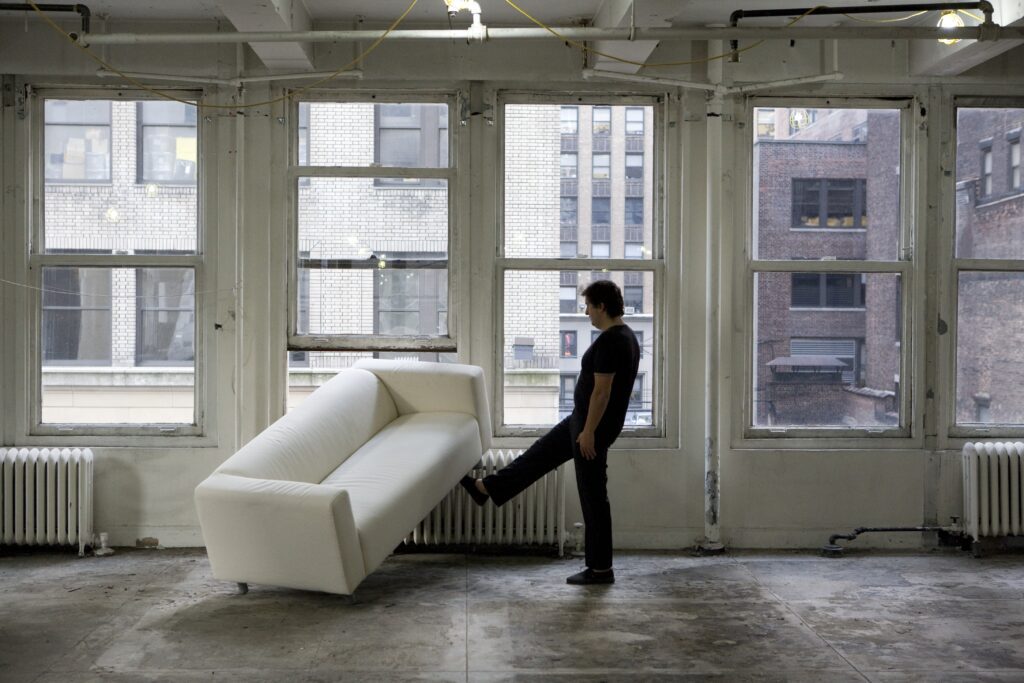 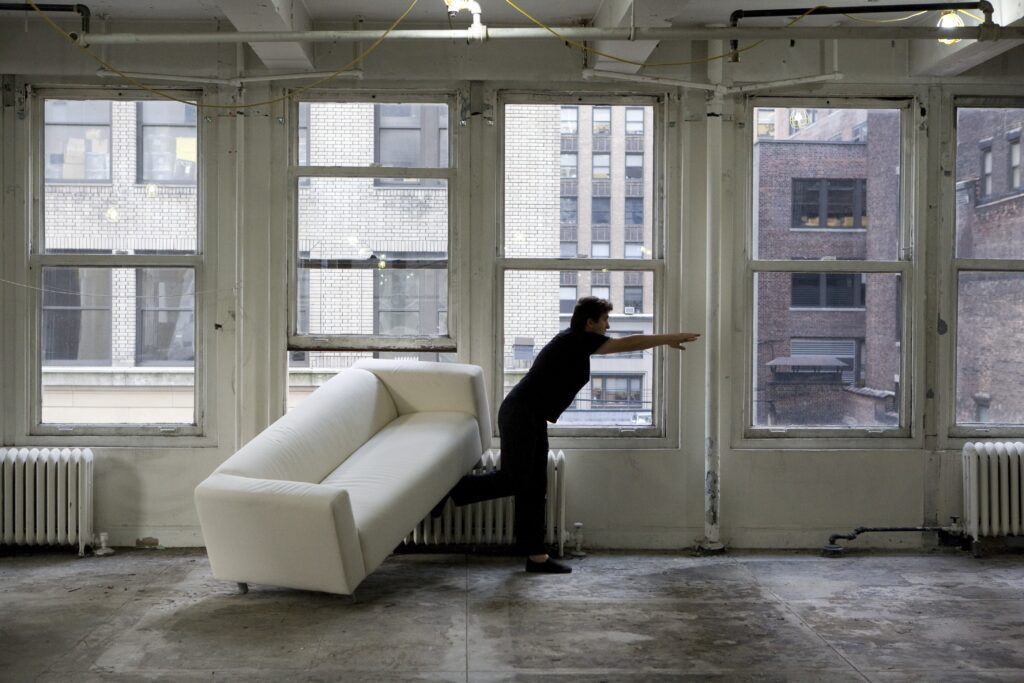 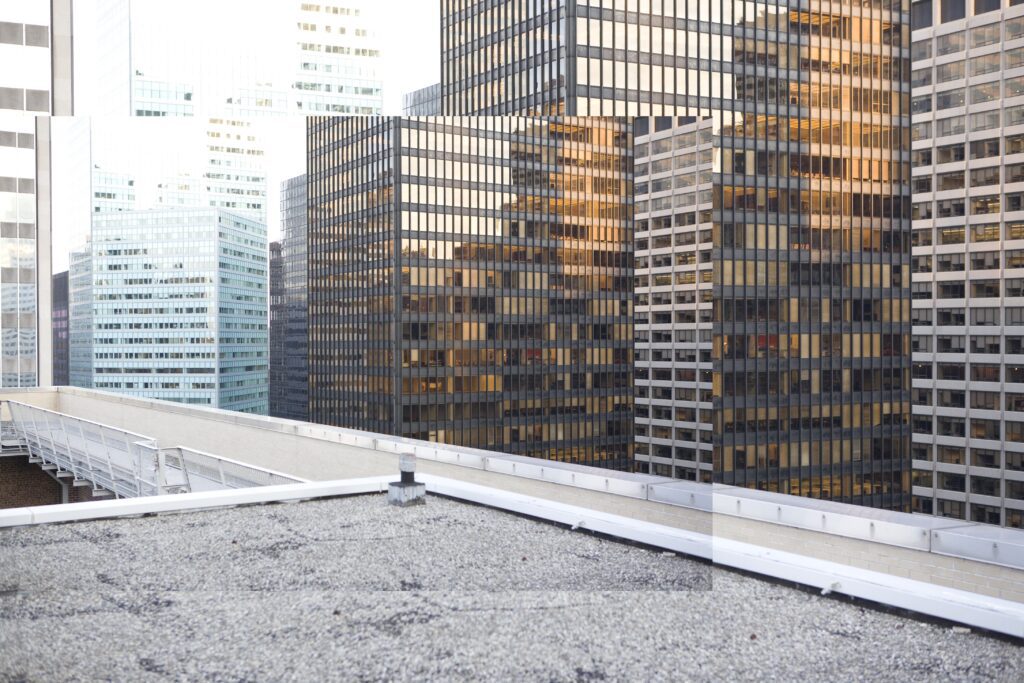 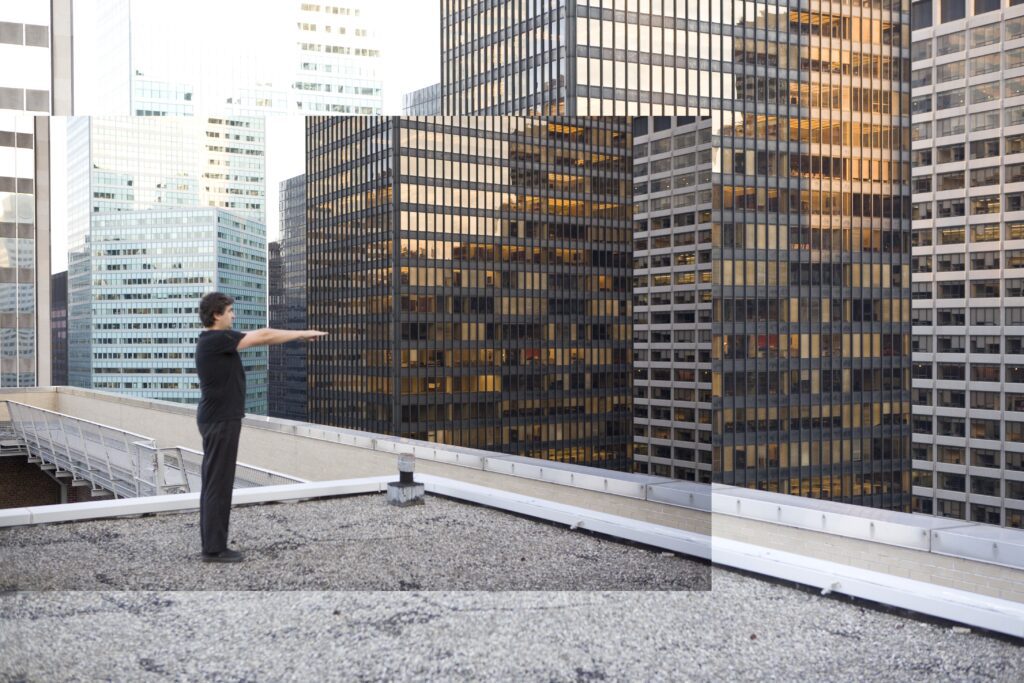 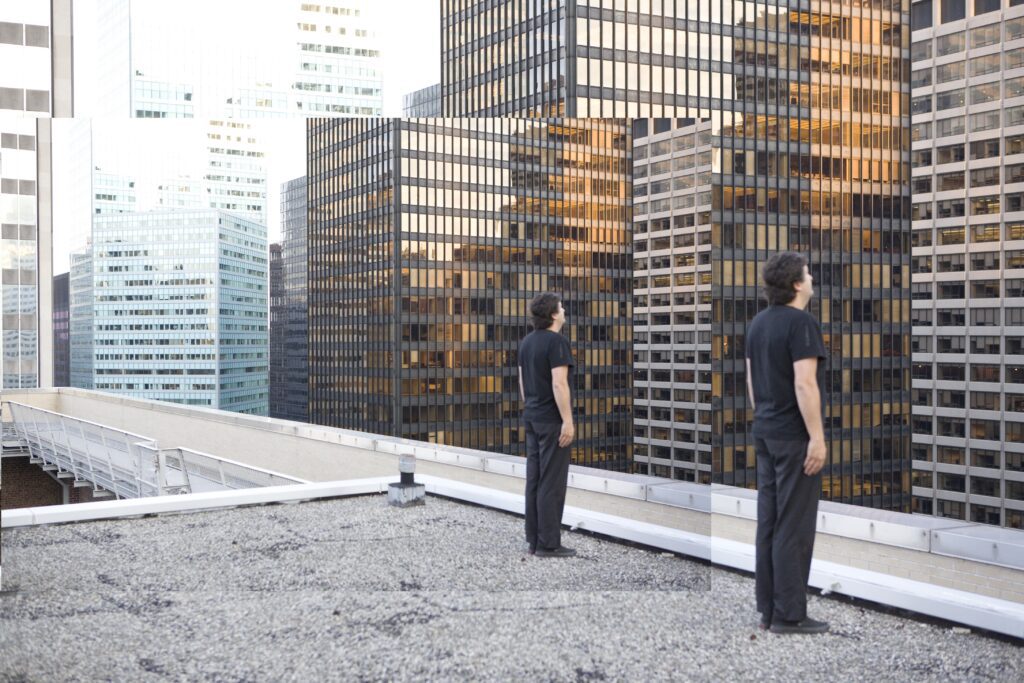 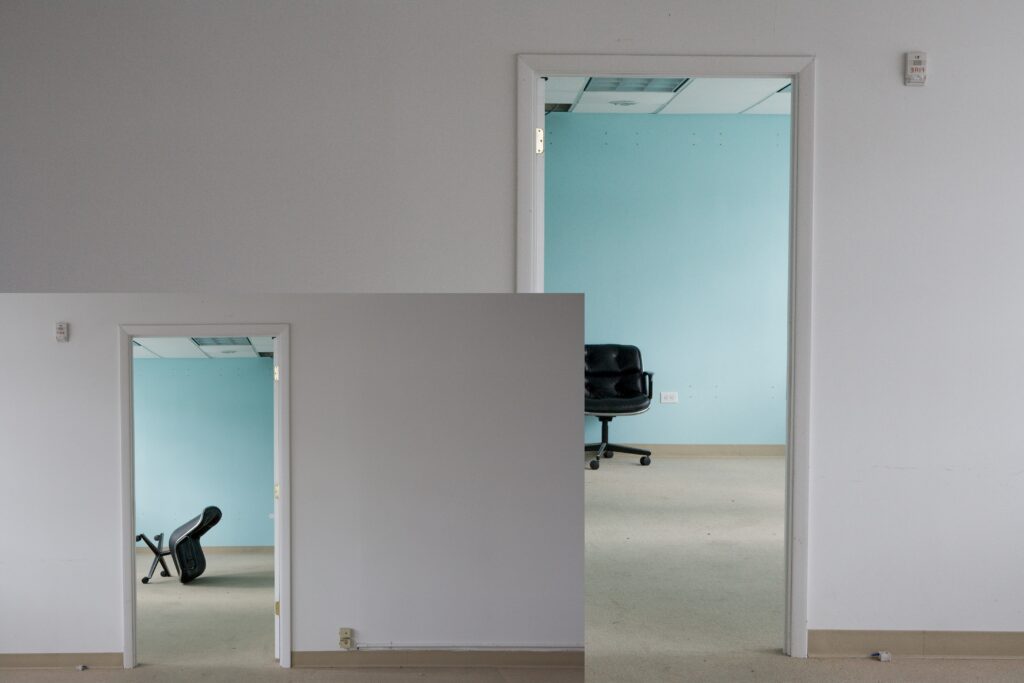 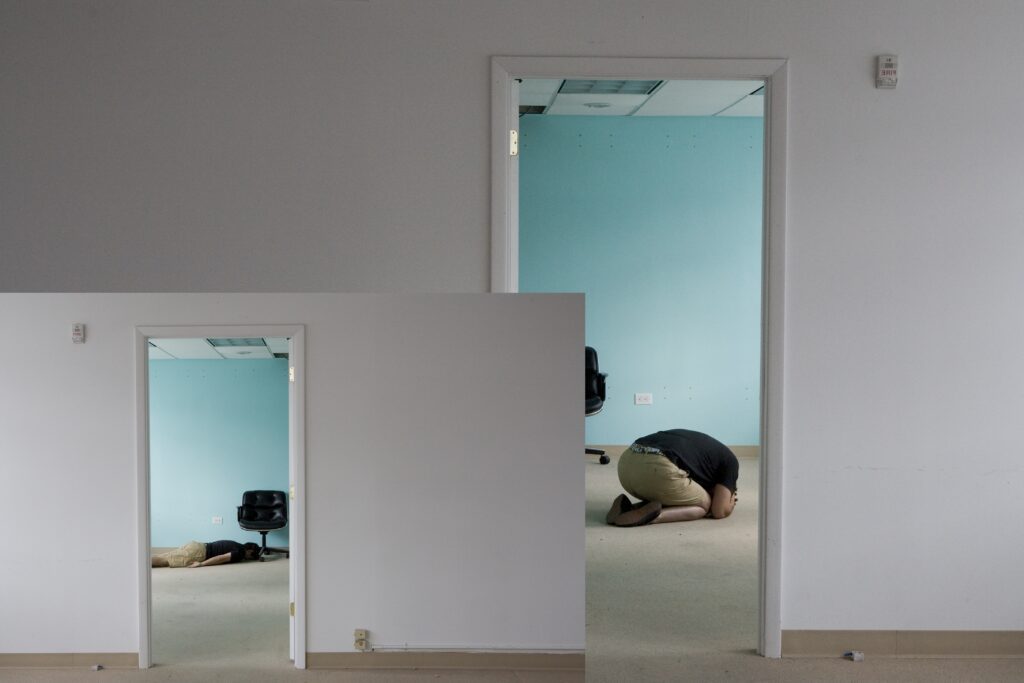 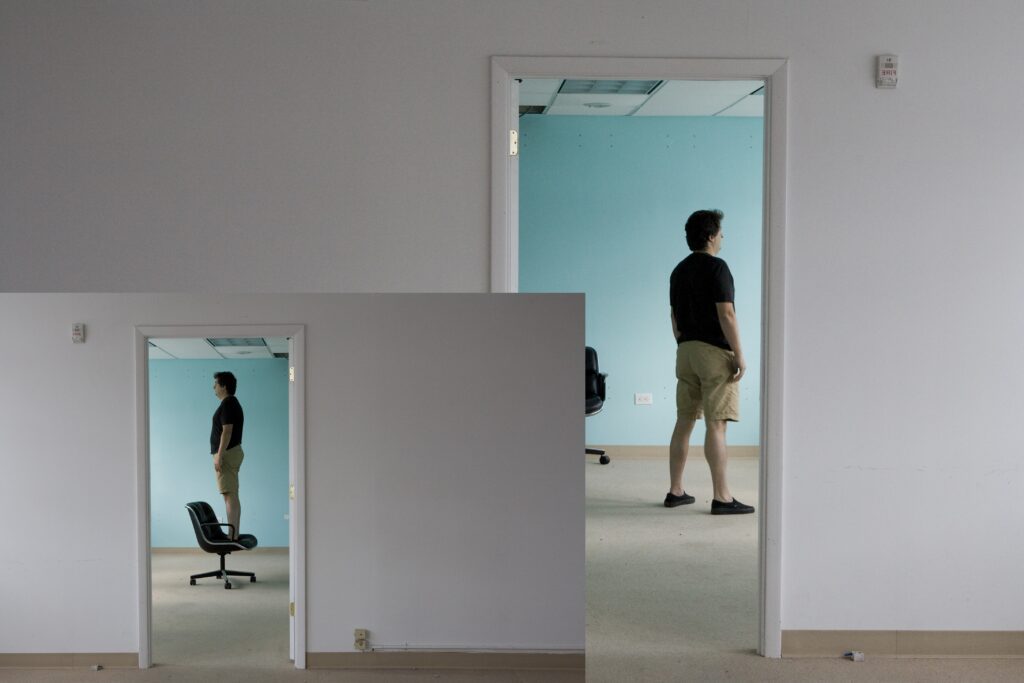 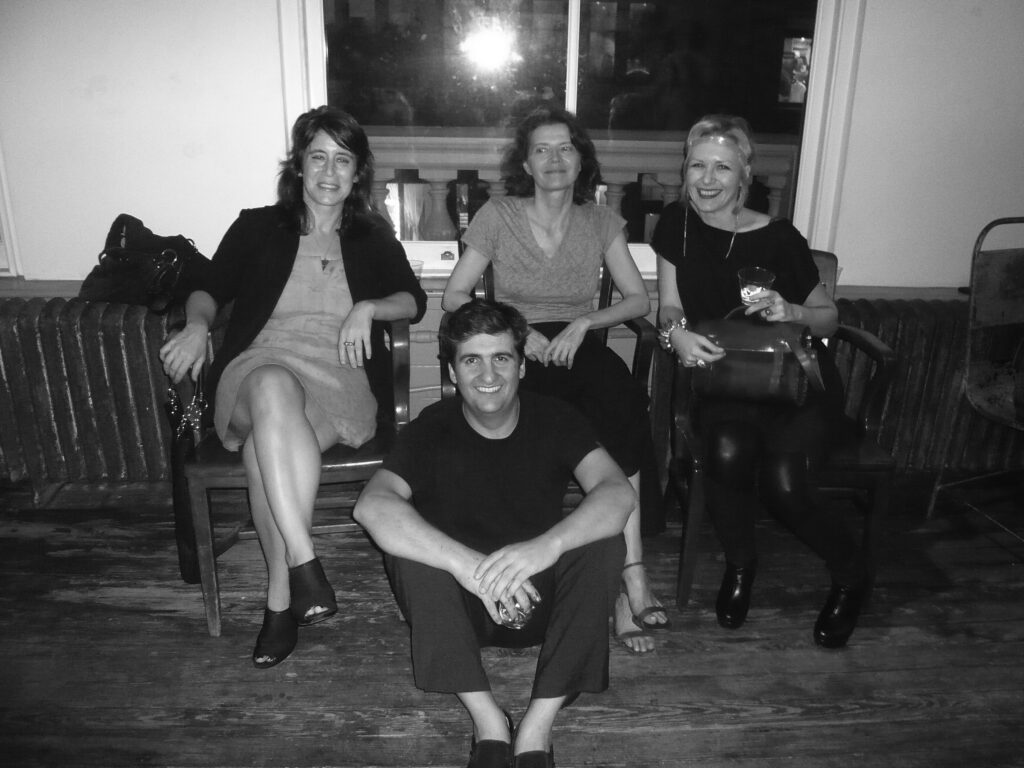 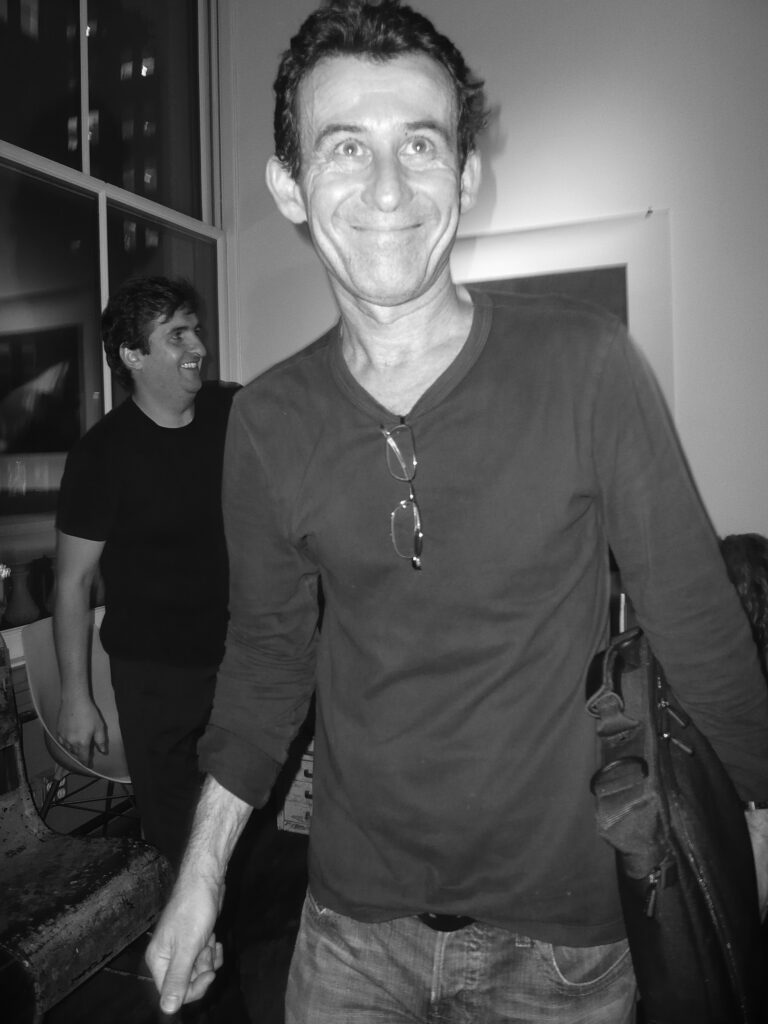 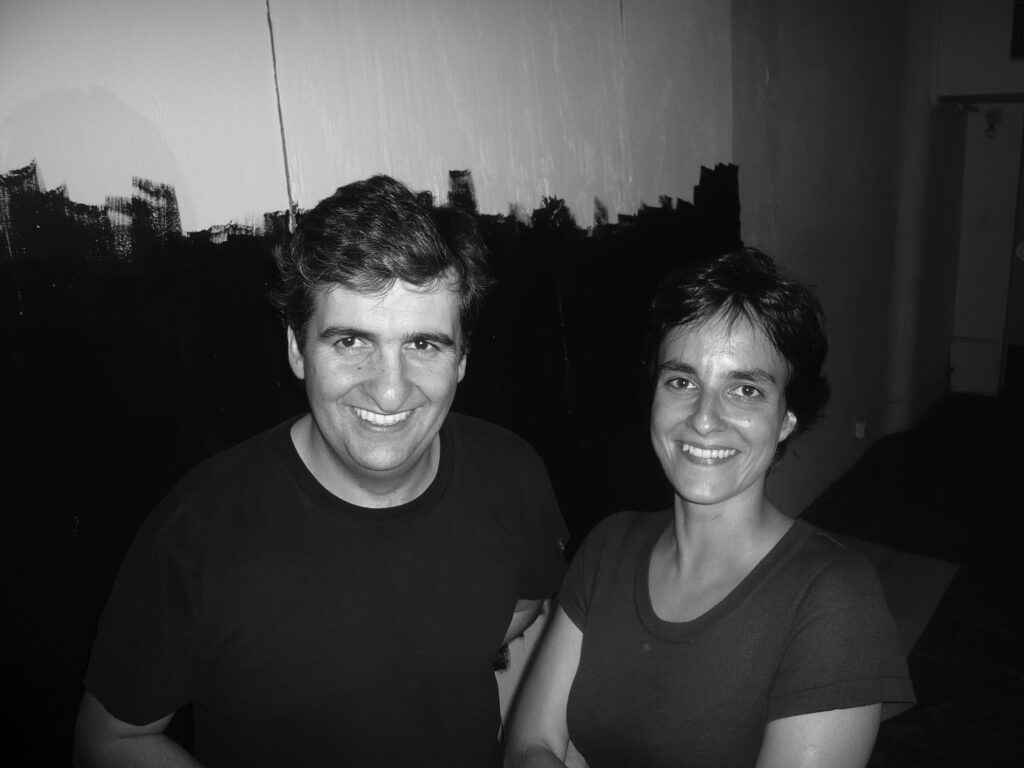 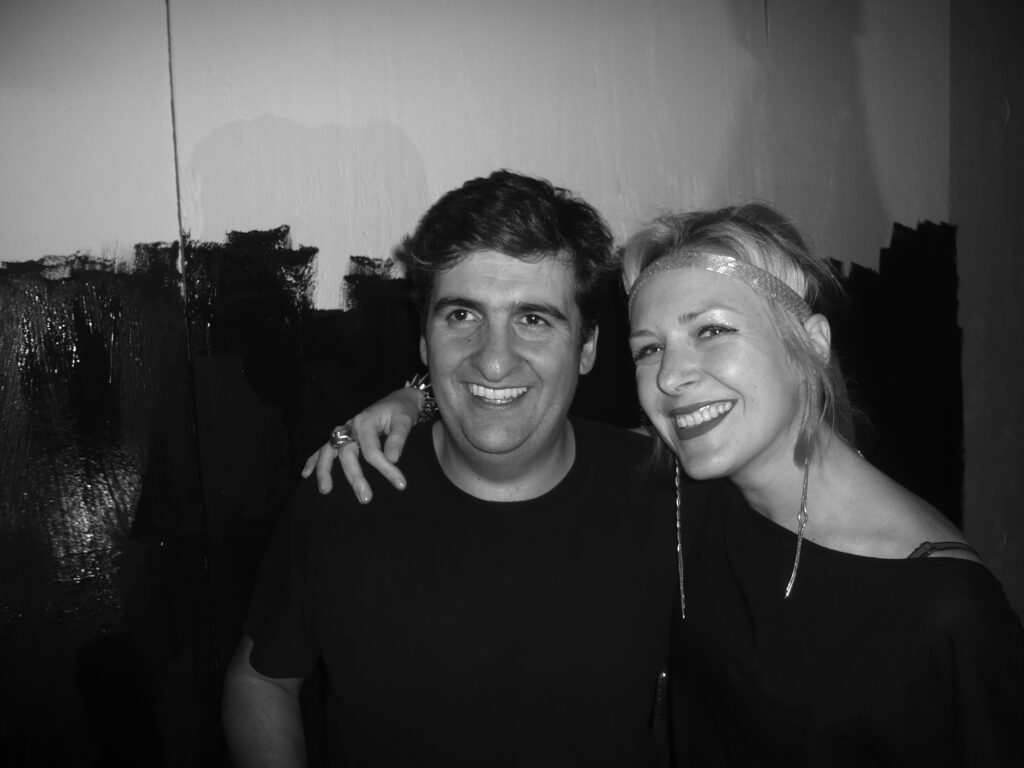 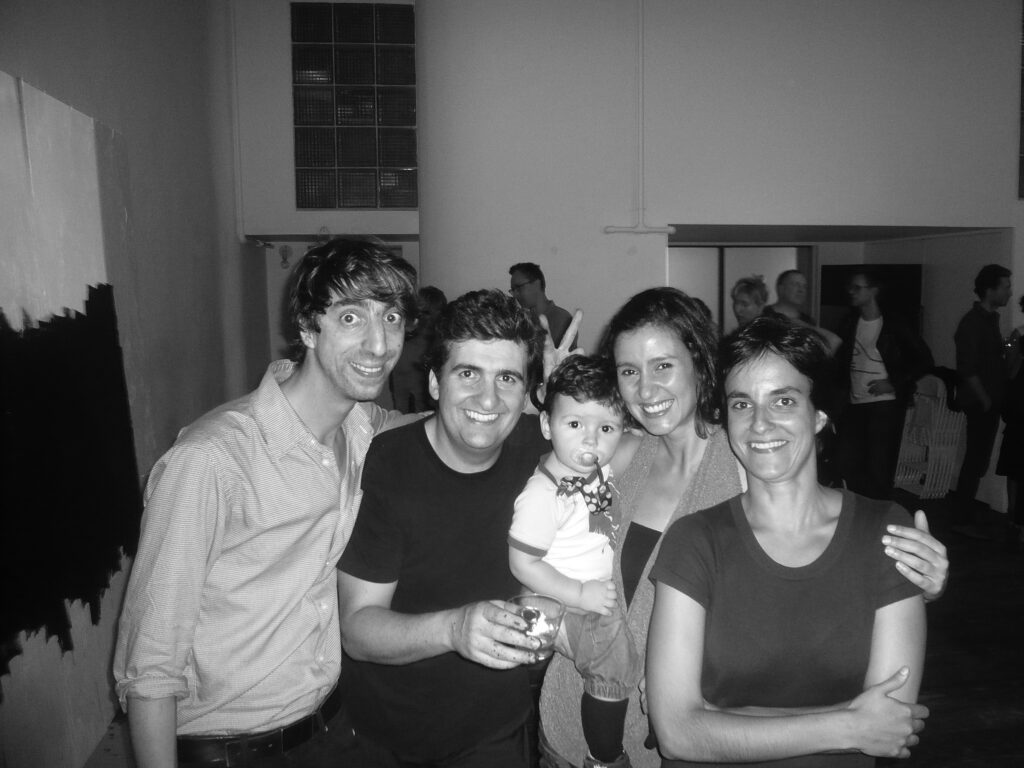 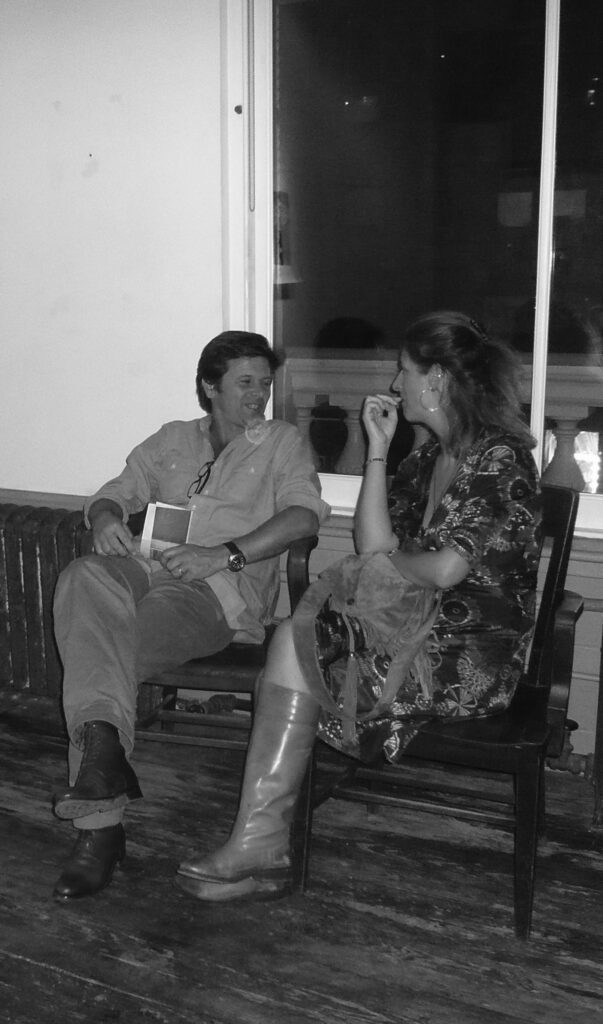 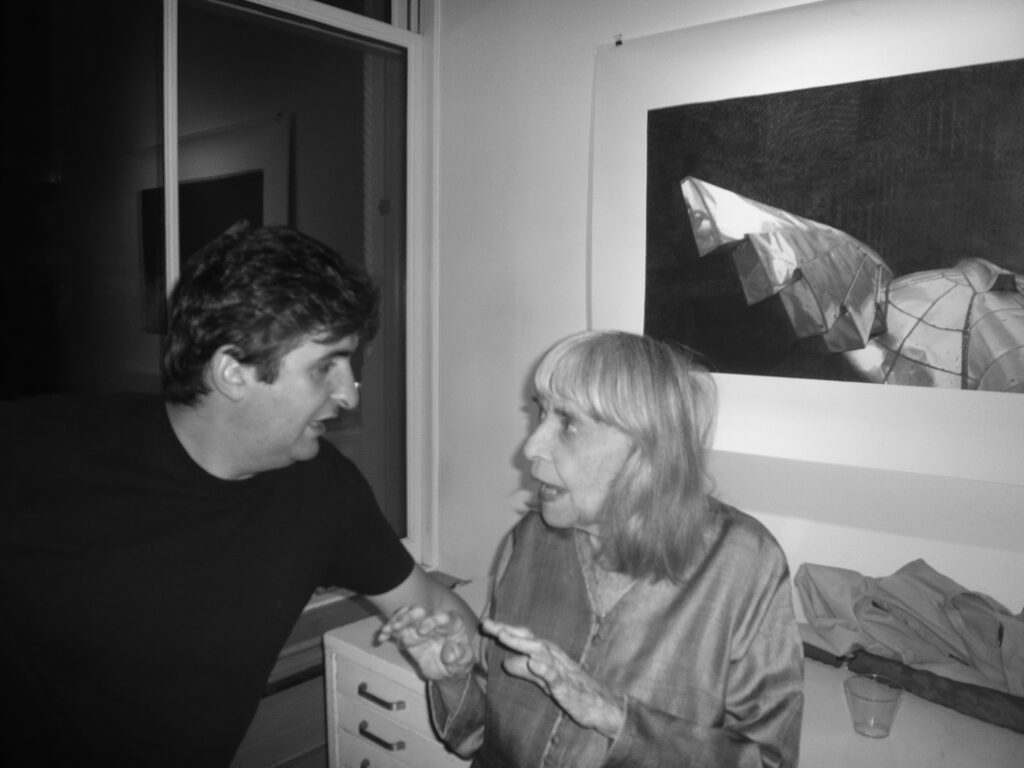 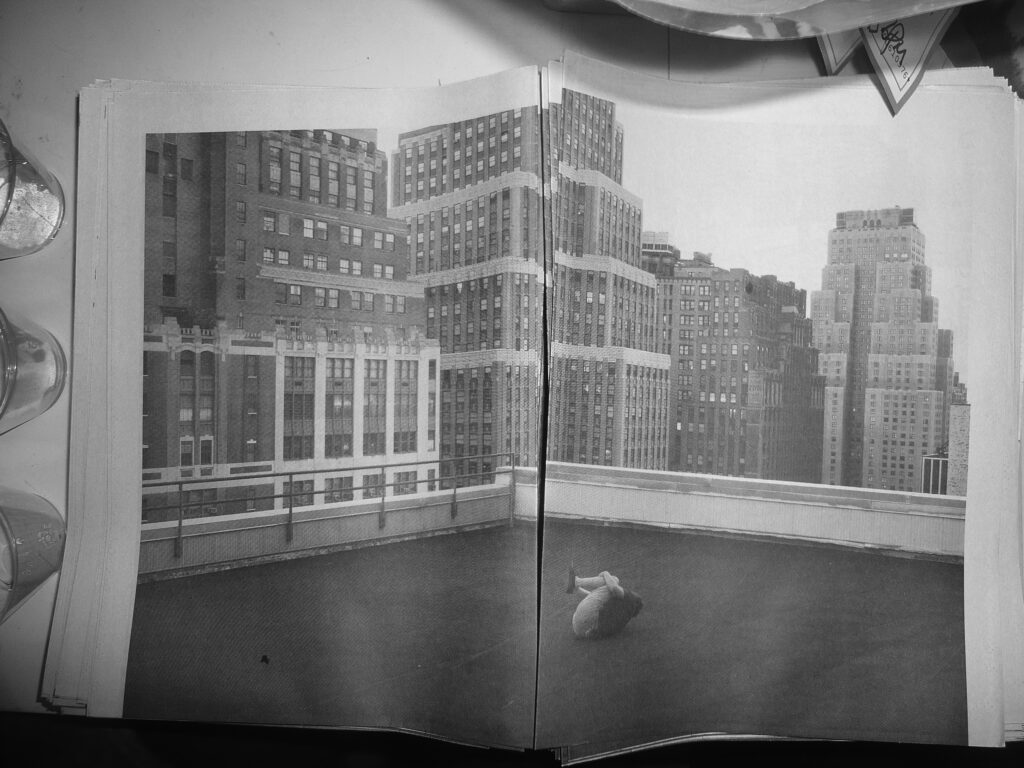 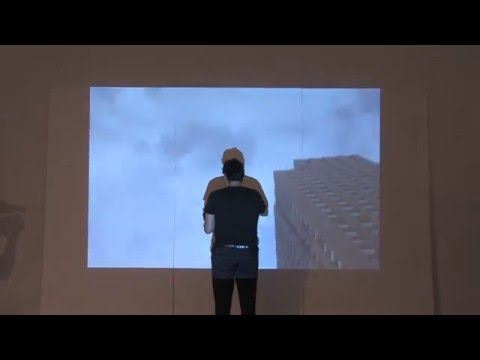 From above, below, within and without: mapping and performing the city

With a background in architecture, Tomaz Hipólito´s work has evolved in several mediums such as photography, video, installation, performance and drawing. His practice is centered on staging and examining how we perceive relationships between individuals, objects and space. Hipólito frequently revisits motifs and themes he explores over time, a process that reflects the importance the artist gives to “excavation” as he proceeds in his thematic research. The body of work presented at The Emily Harvey Foundation was realized during a six-month residency hosted by Residency Unlimited in New York.
In rebuild_00 Hipólito intersects two immense themes: the city and its architecture. He addresses those major artistic subjects tending to place the individual in relation to them, with a strong emphasis in performativity.
From the early stages of photography, architecture has constituted one of its privileged motifs. Artists as Ed Ruscha and Dan Graham have documented and analyzed certain aspects of American architecture in the sixties: the first created, amongst others, a panoramic view on Every Building on the Sunset Strip, Los Angeles (1966) and the latter examined suburban landscapes, presided by a serial and depersonalized logic, in the photo-essay Homes for America (1967). New York in particular has been subject of many books and artistic projects such as Gordon Matta-Clark´s seventies “anarchitecture” site specific “building cuts”. Matta-Clark dissected actual existing buildings and worked about its negative spaces and used a similar gesture also with negatives of photographs.
The starting point for the artist was to produce photographs of New York City´s skyscrapers. In rebuild_00 Hipólito portrayed some of the ex-libris buildings in the city or took photographs from them looking at their surroundings. Even though he investigated landmarks like the Seagram, the Chrysler, the Lever House or several buildings belonging to Time Equities Inc. amongst others, his point of view is rarely directed towards the recognizable. On the contrary, he reinforces or stages existing tensions for instance between urban landscapes, its surroundings and interiors.
While the project was initially intended to be more architecturally driven, it developed into a manifold path. Whereas his journey departed from an observation of facades and skyline views, from a more distant point of view set on rooftops, he then shifted to a more intimate gaze. He became interested in transitional vacant interiors before impending renovation, interacting with the objects he found there and staged fictitious and parody-like experiences within these sites. Later he returned to the “outside”, but this time to examine exterior views from and on selected rooftops.
Sometimes Hipólito erases the identity features of a building, as in the case of the Chrysler gargoyles, considered by him as independent objects, veiled with drawing, revealing new qualities. Therefore, he reconstructs these sculptures by the act of drawing. In other works, he targets into rooftops located in a lower level compared to the observation point, selecting from the landscape his motif of interest, and then covering the image selection with black paint. In both cases, the result is the creation of negative spaces, a hybrid between tri-dimensionality and the flat image, landscape and geometrical form.
The choice to photograph from the rooftops of skyscrapers as a departure subject adds an element of distance to these works: Hipólito is alone in an inaccessible level, where most New Yorkers have never been, detached from the buzz of the city. In fact, it was required to have the building´s owners’ security permissions, a circumstance that reinforces this isolation. Throughout an exploratory progression, the artist familiarized himself increasingly with this theme and began to feature in the images he was producing. His immersion as a character in the work points to an increasingly accentuated performative expression.
This exhibition at The Emily Harvey Foundation presents a range of work that reflects this transition, materializing in several formats that convey distinctive and personal visions about the city. While architecture photographs are usually immobile and static, in Hipólito´s work the solitary human figure (sometimes doubled) transmits a certain perplexity into an unseen perspective of a frenetic city and a sense of discovery. The city is thus re-constructed (or rebuilt) through various research attempts and experiments with an underlying tragicomic tone, spanning from the look of a newcomer into a progressively more familiarized individual.